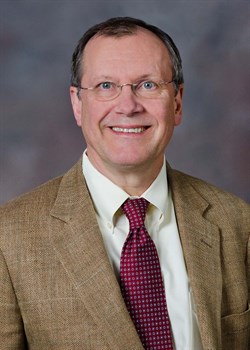 David H. Ellison, MD, FASN is a graduate of Stanford University and Chicago?s Rush University. He completed his internal medicine residency and a research fellowship at the Oregon Health & Sciences University (OHSU), and a nephrology fellowship at Yale University.

At OHSU, Dr. Ellison, a tenured Professor of Medicine, Physiology, and Pharmacology, is also director of the Oregon Clinical and Translational Research Institute, associate vice president for Clinical and Translational Research, and a staff physician for the Veteran Administration?s Portland Health Care System. Dr. Ellison is board certified in internal medicine and nephrology.

Dr. Ellison?s research interests include the interface between the kidney and the heart, with work ranging from fundamental biochemistry to human implementation. He has focused on the thiazide-sensitive NaCl cotransporter (NCC) in the distal nephron work that led him to study rare monogenic diseases, such as Gitelman syndrome and Familial Hyperkalemic Hypertension, but also to research mechanisms of edema formation in heart failure in order to devise better treatments of diuretic resistance. His other research includes study of mechanisms by which therapeutic drugs impact solute transport, and unravelling the mechanism of trimethoprim-induced hyperkalemia and tracrolimus-induced hyperkalemia with hypertension. He has won numerous research and teaching awards and been recognized as a national and international lecturer and fellow.

He has served ASN in numerous roles, including a term as At Large Councilor, as well as membership on its Awards, Basic Science, Education, Abstract Review and Selection, Nominating, and Recertification Task Force Committees, and as organizer for Kidney Week Programs and Symposiums. In addition to his ASN efforts, Dr. Ellison has held many leadership positions for various industry councils, studies, and research projects. He is currently a consulting editor for Hypertension and was an associate editor for the Journal of the American Society of Nephrology (JASN).

Dr. Ellison is a professor of medicine and physiology and pharmacology, director of the Oregon Clinical and Translational Research Institute and associate vice president for Clinical and Translational Research at OHSU. He is the past chair of the Subspecialty Board in Nephrology for the American Board of Internal Medicine, and past chair of the American Heart Association?s Council on the Kidney in Cardiovascular Disease. He was program chair for the American Society of Nephrology?s Kidney Week in 2010, and was recently elected by its members to its leadership council. He is an elected member of the Association of American Physicians, and is past chair of the Kidney Molecular Biology and Genitourinary Organ Development study section for NIH. He also was previously a standing member of the Renal Merit Review Study Section for the Department of Veterans Affairs.

Our work probes heart-kidney connections, inherited electrolyte disorders, and drug nephrotoxicity. It has unraveled how mirror image monogenic disorders, Gitelman and Gordon syndromes, affect solute transport and blood pressure, through a novel signaling pathway. This has led us to identify a new potassium switch model showing how dietary sodium and potassium interact to reduce blood pressure and cardiovascular disease. We have also elucidated mechanisms that cause diuretic resistance in patients and proposed new treatment approaches. Along the way, we have identified how several commonly-used drugs cause kidney-related side effects, thereby allowing their use to be optimized.

I am passionate about building a bright future for kidney medicine and kidney science, but both must be reinvigorated for Nephrology to be a "field of choice" for trainees once again. We are at a promising inflection point, driven partially by ASN's current efforts, but many risks remain and a clear path forward is just now emerging. We must address new challenges, while retaining and evolving ASN's traditional areas of strength. It has been the honor of my professional life to serve on the ASN Council, but I have just now developed sufficient perspective to be most effective.